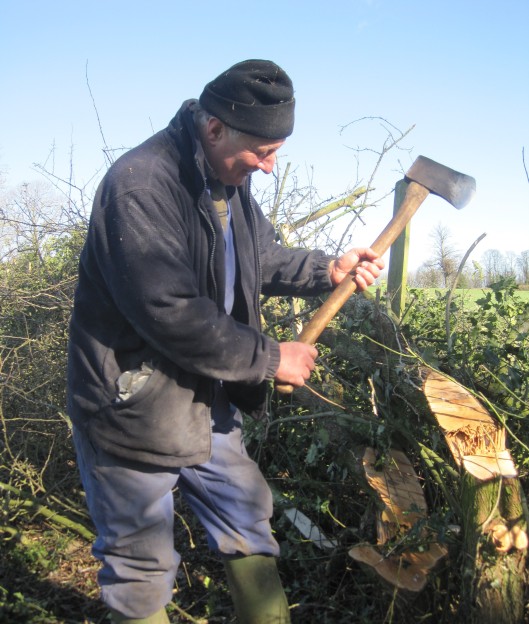 Gordon uses an axe to pleach a hedge.

Last February, when I visited my cousins Gordon and Sue on their farm in the Peak District of Derbyshire, I saw a huge pile of cut branches in the middle of one of their fields and a neatly laid hedge along the side. Gordon had been pleaching.

He recently bought a small farm adjoining his own that used to belong to his great-uncle on the “other” side (i.e., not the Smith side where my grandfather, Henry Victor Smith, and his grandmother, Maude Smith, were brother and sister, but rather through the side of Maude’s husband.)

The farm badly needed some basic maintenance, so Gordon and his two sons, Tony and Ian, fixed up the farmhouse and barns so that they were habitable for people and animals, respectively, and then turned their attention to the land: in particular, a 15-foot-high, 300-foot-long hedge that probably hadn’t been touched in 30 years.  It was a long, tall, unwieldy, straggly mess that needed to be tamed and brought under control: in short, it needed to be pleached.

Pleaching is an age-old art, practiced in areas of the country where fields need boundaries, animals need to be enclosed, stones are few and hedges are plentiful.  Pleaching a hedge means cutting young trees and bushes so that they can be bent to the horizontal or at a slight angle.  The new growth then pushes through the old growth at a roughly 90-degree angle, ultimately forming a very strong hedge.

Hedgerows have a long history in Great Britain, going back to the Bronze Age, around 1000 B.C., and continuing to the present day.  As the Royal Society for the Protection of Birds (RSPB) says in its website,

“The first Bronze Age farmers had to clear woodland to make fields. On occasion, strips of woodland were left to mark the boundaries. These are our oldest hedgerows, and they are often on today’s parish boundaries.

“Planting of new hedgerows started around Roman times and continued on and off through to the mid-18th century, when the Enclosures Act prompted a great spurt in hedge planting, mostly around the English Midlands.”

In 1993 it was estimated that about 204,000 miles of hedgerow remained in England.  In our part of Derbyshire stone walls predominate, but there is still the occasional hedge, such as this one.

Tools for pleaching include a chainsaw, an axe, and a bill hook, the last two wielded by hand, as they have been for centuries.

A bill hook used for pleaching.

The bill hook, pronounced “billock,” which rhymes with “pillock” (British slang for a stupid or annoying person), is a tool that had its origins in medieval times when it was used as a weapon, similar to the halberd.  Now it is used for pleaching.

The first thing Gordon and his sons did was to cut out the excess branches that got in the way of creating the new hedge. Obviously, they had a big job, judging by the huge pile of branches and trees in the field. 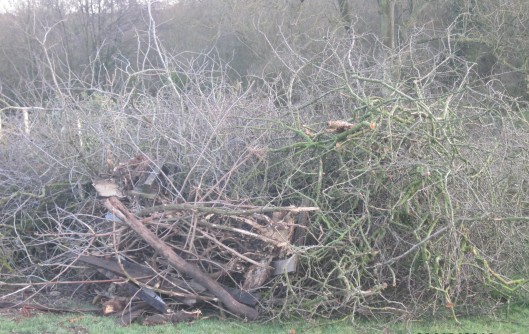 The remaining branches were cut at or near ground level almost all the way through. Obviously, this is a very skilled task, because one badly aimed pass of the bill hook or chainsaw could separate the tree trunk or branch from its base, possibly leaving a large, dead area in the new hedge.  The goal is to cut the branch enough so that it bends easily to the ground but not so much that little or nothing remains to attach it to its base and roots. This is how the tree trunks and branches should look when cut properly:

Tree trunks cut for pleaching.
After he had done the cutting, Gordon laid the pleached trunks and branches at a 30-45 degree angle to the ground. In some cases, as in the hedge my grandfather pleached over seventy years ago, the branches are laid almost horizontally to the ground.

Gordon’s field slopes downhill, so he started pleaching at the top of the hill, cutting the hedges on the downhill side and laying them uphill to keep the angle of the bend less than 90 degrees, which could further stress them and cause them to break off from the base.

Pleaching is generally done every 15 or so years, so I was extremely lucky to be able to witness it, because at most it is done only five or six times a century on an individual hedge.

Here’s what the finished hedge looked like.  As seen below, stakes are installed at regular intervals to steady the newly cut hedge and keep it in place. 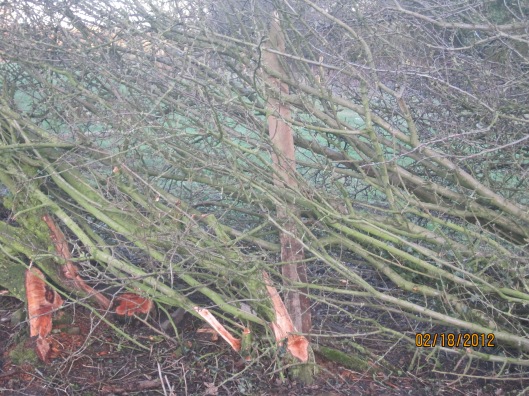 I kept checking on the hedge throughout the spring, watching as it came back to life. In May, there were young shoots appearing on the branches.

New growth on the pleached hedge.

These new shoots will grow towards the sun, making their way through the old branches to create, over the years, a naturally interwoven, living enclosure for farm animals.  In addition, the hedge will provide a home for the 30 species of birds that typically nest in hedgerows:  whitethroats, linnets, yellowhammers, dunnocks, willow warblers, wrens, robins, song thrushes, blackbirds, chaffinches, greenfinches, and partridges; animals such as toads, newts, rabbits, and foxes; and flowers such as lords and ladies, bluebells, foxgloves, and anemones.

Pleached hedges, particularly those that are 800-900 years old, are wonderful reminders of the country’s history, a beautiful thing to behold, and a lovely aspect of the English countryside.

If you’d like more information about how to help protect the English countryside, please go to the website of the Campaign to Protect Rural England at http://www.cpre.org.uk/

10 thoughts on “How to Pleach”

Lost in the Pond