When my father, a geophysicist, went to Houston in 1969 to analyze the moon rocks for NASA, he decided to go for a walk. Being a typical Englishman, he would go on at least two walks a day, rain or shine, snow or no snow.

He hadn’t gone very far from his hotel before a police car pulled up and he was asked what he was doing.  “Going for a walk,” he replied. They told him that no one in Houston ever went for walks, and that his behavior was suspicious.  He shrugged his shoulders, and they finally let him go.

No one else in the world goes for walks like the English.  Walking is what the Brits do to get up an appetite for the next meal, brush away the cobwebs that have accumulated while they’ve been sitting inside, and commune with nature.  There are over 140,000 miles of footpaths in England and Wales, and every one one of them is trodden numerous times every year. 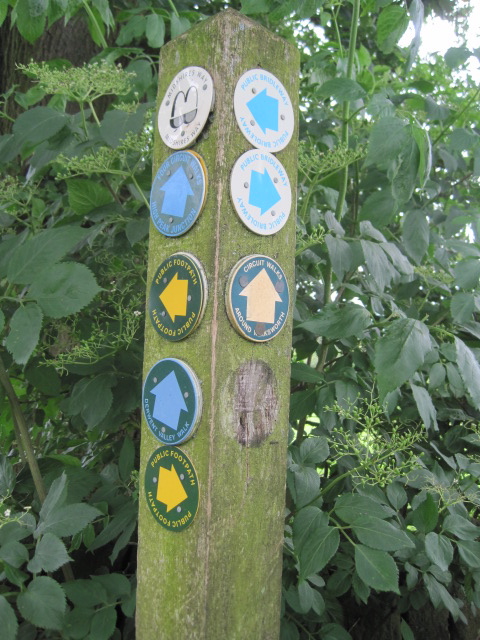 In my English family, whenever one of us would say, “Let’s go for a walk” or my father would say, “Walkies*?,” we’d get ready en masse, the entire family, and head out the door, whether we were in England or America, in a city or the countryside, or it was sunny or bucketing down rain. (*”Walkies” is a phrase popularized by the English dog trainer Barbara Woodhouse and is used humorously when asking people (not dogs) to join you on a walk.)

I can’t get my three American children, all sporty types, to go for a walk on a dare.  They moan and groan about how hard it is to put one foot in front of the other, how boring it is, how “tired” they are–this last from my oldest child who is a track athlete.

For some reason, people don’t walk much in America, with the exceptions of a few American cities such as New York and Boston (both very compact) which are considered very “walkable.”  I remember a particular walking game that was popular when I lived in New York, which consisted of walking randomly by crossing whichever street at an intersection was showing a WALK sign.  Depending on your timing and your luck, you could end up circling the block, or enjoying the unknown delights of Spanish Harlem or the Lower East Side.

My dad pointing out a fossilized crinoid on a building on the Upper West Side building of Manhattan that I’d walked past hundreds of times without noticing.

Whatever the reason, of all industrialized nations, English people walk the most, and Americans the least.

Perhaps the difference between the US and the UK in terms of attitudes towards walking is due to America’s culture of driving and “love affair with the automobile,” suburban sprawl, vast distances, and a tradition of property rights which limits public access to the most walkable parts of the country including its coastal shoreline.  In England, the reasons that make walking such an integral part of the culture probably have to do with a long tradition of walking (one of my great-uncles used to walk five miles each way to get to school), a limit on suburban sprawl, small distances between villages, quick access to green spaces, an unwavering belief in the need to protect the countryside, and a general, national appreciation of nature.

A boat in the Cromford canal.

My children will, if sufficiently cajoled and shamed, go for walks in England, whereas they won’t in America.  And in so doing, they’ve seen some majestic vistas and historic sites;  a trough where Oliver Cromwell was said to have watered his horse in the mid-1600s;  a sunken boat in a canal built in 1794 for Sir Richard Arkwright, the Founder of the Industrial Revolution;  a Bronze Age stone circle;  and a manor house where Mary Queen of Scots was imprisoned in 1569 before she was taken to London and executed; and all the wild bilberries, gooseberries, and strawberries they can pick.

Wingfield Manor, where Mary, Queen of Scots, was imprisoned.

As I always tell my children when we return from a walk, they now have new memories of what they have seen, rather than having no memories from doing something completely unmemorable such as watching a screen.  I don’t know if they agree with me now, but I hope that, looking back, they will see the value of their so-very-English experience of going for a walk.

Lost in the Pond